And by that, I mean, coming to the realization that I am indeed, Ethan's bitch.

It just so turns out that unless you want to deal with a red-faced, silently screaming infant, you pretty much have to let them sleep when they want to and where they are comfortable. Huh, go figure. You would have thought that considering babies are so tiny and all that, they'd be pretty easy to convince, "Hey, it's nap time. Close those eyes and take a little nappy-poo in the crib that Daddy and I spent a crapload of money on. Enjoy those cushy bumpers and crib sheet that cost Mommy a freaking arm and leg."

But no. Babies have an idea of where they want to sleep and I'll give you one guess....it's on their mom. Not next to their mom or near their mom. Nope. ON their mom. And I'm the Mom. That means I am the crib. ku-ku-ka-choo...

Since day 1 (really, since day 7 when he was evicted from his tanning bed in the NICU), Ethan has preferred to nap in the crook of my right arm. Swaddled, unswaddled, naked, or onesied-up, this child insists that a good nap can only be had during the day if he can be sure his mother is completely incapable of doing anything but typing one-handed and watching TV. This is stay-at-home-momness at it very finest.

I haven't really minded it. It means I get a front-row seat for one of my very favorite things in life--my baby's yawn. I cannot describe how adorable it is to see a baby open that little tiny mouth, throw his head back and then exhale the yawn out in a little puff of baby-breath air. The best is when he grumbles after it, like a crotchety old man. It's the freakin' BEST. 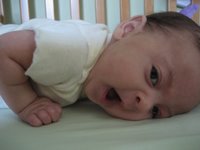 However, now he's four months old and I am starting to realize that if I don't make some changes, and soon, I am going to be lugging around twenty pounds worth of clingy baby before I can say, "My right arm has been asleep for a year...."

So for the past few days, I have been attempting a "transition" with Ethan. It's called the "I'll make you think I'm letting you nap on me and then....switcheroo, sucker!!" Fans of "Friends" will realize it is something akin to the move Chandler tries to teach Ross so that Ross can lead Rachel to believe they are cuddling at night when really, they're not. On the show, it is the "hug for her, roll for you" technique and consists of hugging the girl realllllly tightly once she's asleep and then, rolling her over to her side of the bed and slowly slipping your arm away.

Yes, there is a mother/baby version of this and it consists of rocking, cuddling and the like until little E is drowsy to the point of no return. This is a good point to put the plan in action. It involves moving to a big blanket in the middle of the room and lying down together, still all cuddly. Once we've been lying down for a few minutes, I have, four times now, been able to, slide my way sloooooooowly away from the little man and give my arm a much needed opportunity to, well, move.

I feel almost guilty that I have deceived him into thinking he will be spending the duration of his nap all snug in mommy's arm, but then I dare to imagine the freedom of two entirely free arms for an hour, or...or two!! Ah, to dream the impossible dream.

Sadly, my arms have only remained free for about twenty minutes at a stretch because the little man is on to me. He will lie there, as peaceful as can be and oh-so-cute and then, just as I am letting my guard down, maybe daring to pick up a book, as if by baby radar he senses that I am not, in fact, holding him. Then there is some crying and a bit of Mommy running to the rescue, to start the whole process again at the next nap. Dammmmmmmmmmmn. I am his bitch.

So, I will leave you with a couple images of my commander in chief. 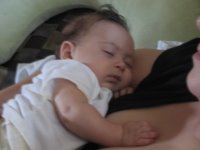 shhhhhhh, don't wake the baby, or my right arm... 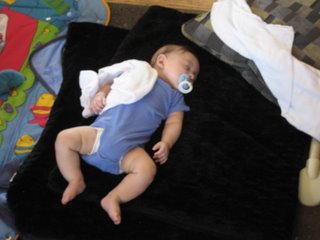 You're getting there!
I'm typing this listening to my kiddo crying in her crib. Uck! She's gone down in it the last three nights, and before that, it was her swing or my chest or nothing! I give myself three more minutes, max, and I'm going to go pick her up. Sigh.
And we're done... Swing it is!

Hiya - I'm one of Jason Gayl's friends - I started reading your blog because it is linked from his. You might want to try putting a single (or queen) mattress on the floor, in the corner of his room. I'm a huge fan of this, because it allows you to cuddle the baby to sleep and then sneak away. They love it too, because they don't feel confined - and they are really too small to roll off - if you are worried, get body pillows to keep them safe and feeling snuggled - even if they did roll, a nice soft rug would cushion their fall. Good luck with the arm! www.thechaseison.blogspot.com

whoops, meant to send you this link:

I am addicted to the baby yawn too! I can see how this is my future....

I think you know my situation. Although he finally started napping in his crib last week. It only took 7 months.

Keep trying. I found I could let him do two short naps on his own and one long nap on me a day. At least then I knew he was getting one decent stretch.

Perhaps you could try the napping on the boppy. That at least frees up both hands, although you have to try to type over his head if you are at the computer.

From what I can gather there are currently two major schools of thought on raising a child: Attachment parenting vs Ferber (sometimes unfairly labelled the Cry It Out method). It seems that E has successfully attached :) If you want to detach then the Ferber method is explained in "Secrets of the Baby Whisperer" and "The Contented Little Baby book". A Dad.