No matter how hard I try (okay, not that hard...) I can't seem to blog and write creatively at the same time.  So when I blog, characters stay trapped up inside my brain and I sometimes lose entire scenes of potential fictional brilliance (ha. As if)  And when I write creatively, I worry that memories of my actual life and my kid's childhood will slip away if I don't write about them in the blog.   And if I do attempt to do both in one day, my kid and husband go hungry (not really) and have to wade through piles of laundry to get anywhere in the house (really--sort of).   So I have some work to do in the whole life-balancing act department.   But I've written a lot creatively this week, so I think I'll spend some time catching up with you here (the laundry can wait; we still have clean underwear).

So there's been a lot of pool time, and a lot of beach time and a lot of "its too hot to go outside so lets lay in front of this fan that's blowing hot air at us and groan intermittently while we go glassy-eyed staring at the TV/iPad/wall" time.  I should feel guilty about those particular lethargic times, but if you could see the way this kid runs, scooters, bikes, swims, jumps, light sabers, and generally burns more calories in a day than he consumes in two days, you'd agree that a little bit of veg-out zone couch-potato time for him isn't going to get in the way of him being healthy and/or fit.  Also? These particularly lethargic times give me a chance to do that aforementioned laundry.  Sometimes.

This week Ethan is in "Knights, Dragons, Princesses & Fairies" camp.  He has been coming home with cardboard shields and tin-foil helmets (I did double check the camp description and it says nothing about indoctrinating the kids in government conspiracies, so I'm assuming the tin-foil hats are purely for aesthetic and pretend-play purposes).   I'm kind of relieved to see him shifting away a tiny bit from lightsabers and quoting Star Wars to other forms of imaginary play--perhaps now is a good time to introduce him to Monty Python's Holy Grail.  Because, you know, with a computer engineer for a dad and a former English teacher for a mom, he might need more help getting on the nerd train. Right?

We've also been watching a LOT of the Olympics.  Ethan is riveted.  We let him stay up late to watch the opening ceremonies, but he only made it to 9pm (a full three hours from Sir Paul McCartney's performance--poor kid; his musical tastes do not sync well with his six-year old circadian rhythm).   Also, letting a six year old watch a piece of performance art like the opening ceremonies?  Is exhausting.  "What is happening?"  "Who are those people?"  "What are they doing? "Is that smoke?" "Is that real pollution in the air now?" "What's happening now?" "Are those kids really all sick?" "Is that Mary Poppins??!!!"  "Why are there so many Mary Poppinses?" "Is Mary Poppins from London?" "Remember when we went to see Mary Poppins at the theater, Mom?"  "Was it the same Mary Poppins?"  "What's happening now?" "Mommy, why is there a giant baby in the middle of the field?"
"Mommy, why are the Americans wearing berets? Are we French?" (okay, I made that last one up...but the rest of them?  Happened.)

When he's not asking questions about the opening ceremonies, he's asking why I cringe every time a diver's head twirls past the board/platform.  Two words, kid: Greg Lougainis.  Or he's struggling to remember which country is wearing which uniform and asking, much to the chagrin of isolationists everywhere, "Why do we have to root for the American people?  I like China's uniforms.  I'm going to root for them."

We've talked about what good sportsmanship is (ie: not Makayla Maroney) and why athletes cry when they win.  And why they cry when they lose.   Oh, the humanity!!!!

This weekend is the 3rd annual music festival hosted by the group I did the SGK 3-Day walk with last year.  We're not walking this year, but we're still raising money--all of it will stay local, going to two smaller, more transparent, breast cancer research & outreach foundations in the Bay Area.  That was one of the big lessons we took away from the entire SGK/Planned Parenthood debacle of earlier this year--donate your hard earned charity bucks someplace smaller & local, within your community.  Fortunately for us, our community includes some very major research hubs and treatment centers.  Last year we raised almost 20K at this event, and we'll be thrilled to give every penny of it to those local scientists and doctors who are trying to save this and the next generations of moms, sisters, wives, aunts, grandmothers and daughters.

I missed the festival last year bc I was on the East coast; this year I will be there, with (pink) bells on, sitting at a table of my photography, hoping to make some $$$ for the cause. Also the etsy shop that I "opened" last year after this event?  Will actually be really opening sometime before the end of this month.  Just working out some of the logistics of printing out the photographs in a timely fashion as/if the orders come in for them and how to price them.  I'll be sure to start begging for your business just as soon as I'm open for business.

Next week, Ethan and I embark on yet another cross-country excursion (twice in one summer?!! we're cray-cray!) to South Carolina.  Apparently, nothing says "super fun times!" to me like sitting on a plane with a six year old for 6 hours and spending 5 days in the jungle, spongey heat & humidity that is the American South in August..  We usually fly Virgin Atlantic, the airline preferred by hipsters everywhere, but we'll be flying USAir this time.  Please note: I am not a hipster, but I do enjoy being in their general vicinity, and taking advantage of products and services marketed towards them. Ethan has already expressed concern that there will be no TV in the seat back in front of him, at which he can stare blankly for the entire 6 hours.  I have assured him that the miracle of modern technology will see him through the ordeal, via the iPad, and that he'll be just fine.  I, on the other hand, am going to be sitting next to an iPad alternating episodes of the Fresh Beat Band and the Star Wars movies.  I'm going to need a drink and an eye mask to adequately shield me from all that business.

Here are some pictures of my kid because he's pretty cute: 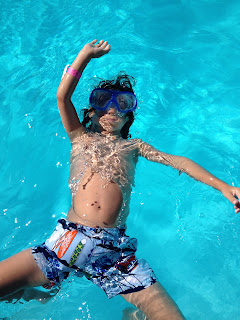 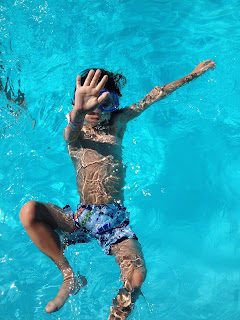 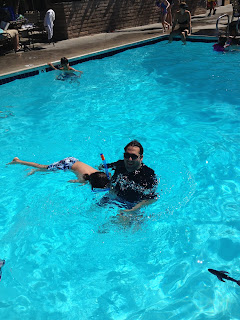 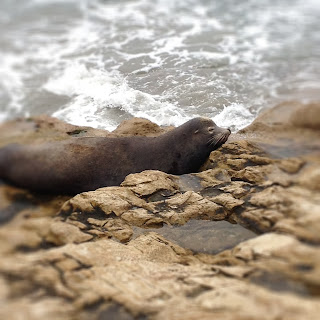 This picture, while decidedly not of my kid, is still pretty cute.  This guy was hanging out at the beach one of the days we went last week. I wasn't really that close to him; I used my zoom. And then I went after a couple of teenagers who were too close to him and started squawking about the law about staying 400ft away from wildlife on California beaches.  I love me some sea lions and I don't want my kid to witness some sort of horrifying sea lion mauling when the wild thing decides its had enough of being oooh'd and ahhhh'd at by stupid humans in side-ways baseball caps.  (although, most likely it would just lug itself back into the water and be done with us, but still....)  I was relieved that the kids listened to me and went on their way, thinking I was all official-like & beach-ranger-y.  Truth be told, I've only seen that 400-feet away from wildlife on the beach in certain areas and only during certain times of the year, but every once in awhile, I have to flex that "I'm a teacher, I'm in control" muscle and see if it still works.  It does. 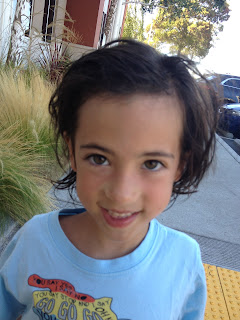 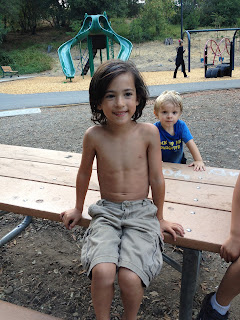 My child has discovered that boys are allowed to run around in public without a shirt on.  As his favorite state-of-being is 100% naked, this is a step in the right direction as far as he's concerned.  Now we get to argue on a daily basis about where and when he can be topless.  Oh goodie. 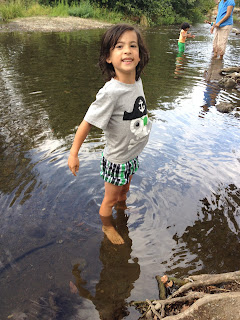 When I told him going bottomless was not an option in this particular (or really, any outside of the home) scenario, he decided to roll up his shorts until they looked like black and green plaid diapers.  Fashion-y. 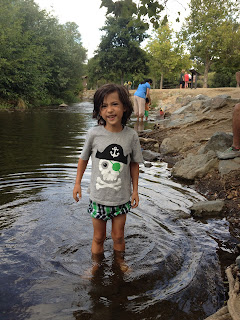 Your music festival is such a great idea! I wish I could go.

My kids always want to know why they have to put pants on before playing in the front yard (backyard is fair game unless there are roofers at the neighbor's house like they were last week). I know, I know, I am such a lame ass.

The festival sounds really fun. Is there a way to donate to either the local institutions in the name of Mammagedon or somehow or other contribute from far away?

Jack would probably rather die than go outside without a shirt on, although he has taken to dancing in the basement in only his underpants (because he gets hot), and Izzy tells him he looks great with his shirt off because we can "see his abs." Oh man.

Greg Lougainis totally ruined platform diving for me. I can barely stand to watch it now