This fall, in the tradition of little Jewish boys & girls everywhere, Ethan started Sunday school, and thus the long and winding road towards his Bar-Mitzvah, in 7 years.  I am hoping when it happens, his Bar Mitzvah party will feature fewer poorly executed Michael Jackson covers by the band and less hair-spray glitter amongst the tween guests.  Guessing since it won't take place in 1984, as mine did, its probably a safe bet that we can avoid those party pitfalls.

Anyhoooo----things with Ethan's Jewish education are already looking far more productive and positive than was mine (staring at a chart of the Hebrew alphabet really didn't teach me much about being a good person and caring for my fellow human being).   On Sunday of last week, in conjunction with the observation of Martin Luther King, Jr's birthday, our congregation held a "Mitzvah Day."  For you non-tribe types, a "mitzvah" is a good deed. There were literally dozens of service projects to choose from, from making aid & relief packages to be delivered overseas by End Hunger Now to visiting seniors at local assisted living housing to participating in a Habitat for Humanity build in our area.  Ethan and I opted to work in the kitchen, making healthy snacks to be given out that evening at a local homeless shelter.

Ethan was very excited to help out; I have to say, for all his expectation that the tooth fairy bring him ungodly amounts of money for each tooth and his whining about not having gotten a new toy in soooooooo loooooooong (3 days after Channukah....), Ethan's got some serious generosity of spirit.  We donated a shopping cart of new toys to Toys For Tots this year & I've never seen Ethan beam with such pride as he did when he put those toys into the barrels.  When we are stopped at a traffic light and a homeless veteran is holding up a "please help" sign in the median, Ethan is the first person in the car to start shuffling around to find a loose dollar or change--"Mommy, he served our country and we should help take care of him."  When we see a barrel at the grocery store collecting cat food for a local shelter--he's all about it.  He still wants what he wants, when he wants it, and isn't quite clear on the whole concept of money not in fact sprouting from trees in endless supply.  But he's got a good heart.

So on Sunday he got to combine his generous spirit and good heart with a whole bunch of melons & kabob skewers, to make fruit kabobs for the shelter.  Ethan and several other first graders (and their parents) milled about the kitchen for almost three hours, chopping melons into chunks to slide onto the skewers.  Please take a moment to imagine...."Wash you hands!" "Chunks! Cut them in chunks--you can't put that sliver of watermelon on a skewer!"  "Please don't eat that!" "Wash your hands!!!" "The skewers are not swords, boys!" "Don't put that on the kabob! Its been on the floor!"  "Wash you hands!"


After we finished 100 fruit kabobs, we whipped up some home made cocoa mix and helped another group dust powdered sugar on 100 healthy whole wheat cookies that were fresh out of the oven.    Sadly, I only have pictures of them making the cocoa and dusting the cookies, because somehow, despite my best efforts to remain on the periphery, I ended up corralling and coordinating much of the kabob business.


We don't mess around when it comes to our combining our calling to make the world a better place and enjoy our cultural and theatric traditions....we had our very own Fiddler on the (Kitchen) Roof.  I can't remember his name, but after his first name on the tag, it literally said, "The Fiddler."  He roamed the synagogue, playing his music for all the volunteers working on various service projects throughout the building and the grounds.  When he first came into the kitchen, the kiddos stopped their work and watched him stroll through the kitchen, effortlessly playing his fiddle and surveying our progress (or lack thereof at that point, given the kids' inability to focus on melon chunks while there was a real live fiddler wandering through the kitchen). 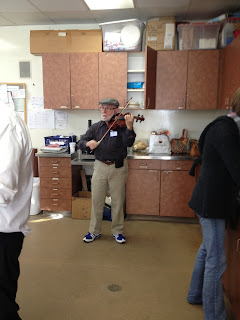 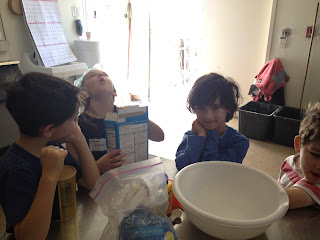 Waiting to measure the ingredients for the dry hot cocoa mix. Patience is a virtue and all that.... 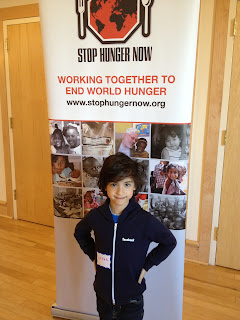 I had Ethan pose for this picture in front of the Stop Hunger Now organization's banner when I thought that's the project we were working on.  Turns out they were doing some hardcore emergency relief food packaging to go overseas, complete with giant bags of grain and assembly lines of volunteers--not entirely kid friendly, so we retreated to the kitchen and our melon kabobs.  But wow--it was amazing to walk through there and see the amount of food being put together to be sent to developing countries in need.

Ethan watched his friend measure out the cocoa.... 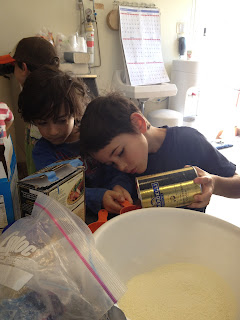 Then Ethan got to level it off... 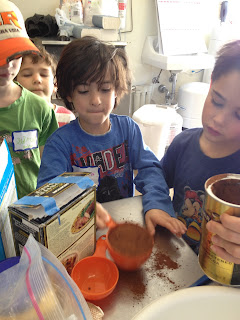 And dump it into the mixture 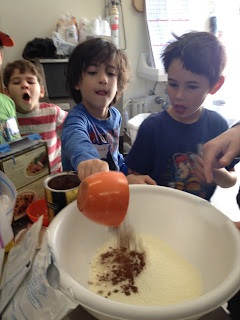 Then Ethan got up on the step stool to powder some cookies. 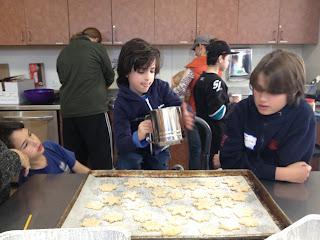 Still with the tongue out whenever he's concentrating....he took this powdered sugar business very seriously. 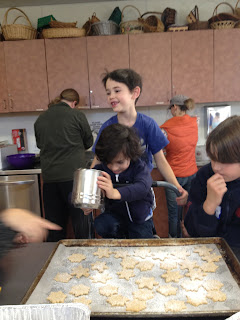 Then they helped clean up. And smiled about it.  Staggering. 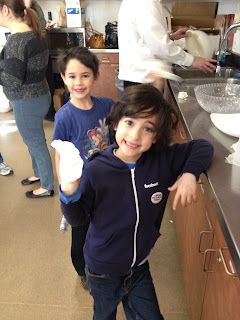 A last, rogue batch of cookies came out of the oven as we were finishing up with everything else, and Ethan decided to "make it snow" and stood up on the highest step of the ladder before unleashing the powdered sugar snow storm onto the little village of sugar cookies below. 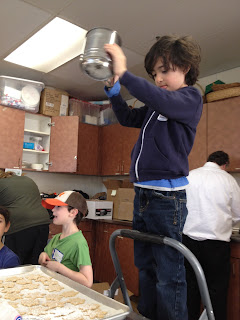 After all our Mitzvah-ing, Ethan and I met Husband down town for lunch.  And that, we think, is when our luck started to change.  We will never know if it was the chicken in our tacos or if there was some bug lingering in our guts just waiting for the moment to strike, but by about 5pm that afternoon, Husband and I were starting to feel....off.

Its true that Ethan had thrown up a couple of times overnight between Friday and Saturday.  But after that he'd been fine.  A little tired, but no other symptoms and no desire to stop doing his thing.  We assumed it was something in the miso soup he'd had the night before. And he was certainly back to his old self on Sunday morning when we were fixing all those snacks for the homeless shelter. It didn't occur to either Husband or I that in those hours, Ethan had passed some puking bug on to us.

So whether it was some sort of crazy coincidence that all three of us ended up with food poisoning within a 72 hour period (Husband's initial theory), or the same virus ripped through us in varying degrees of "omg, just let me die now....." -iness, its no matter.  In a moment that made me SO grateful we didn't fall under the spell of that adorable little totally-vintage, 1-bathroom house we looked at while house hunting, Husband and I began with the puking at the exact same time.  And for hours after.  I lay on the floor of one bathroom texting him "Are you okay?"  and reading his responses, "I think I cracked a rib that time."  We debated via text when/if we should go to the ER, which one of us was more dehydrated and who would be able to take Ethan at 11:30pm on a Sunday night if we had to take ourselves to the hospital.  At the odd times when we found ourselves both out of the bathroom and in our bed at the same time, we communicated through pained moans and whispered "make it stooooooops," until one of us had to get up again and stumble to the bathroom.   It was like that scene in Bridesmaids, but without the wedding gown.  And the street.  And it wasn't funny.

By morning, the most violent of it was over.  But in the past few days, we've decided that the lingering effects are much more virus-like than food poisoning-esque.  And now I have to wonder if our mitzvah of the fruit kabobs and sugar cookies carried this curse of The Barf to those we set out to help.  I am really really hoping against odds that it was the Mexican food we had for lunch because I would feel just awful to think that by being in that kitchen on Sunday, I'd somehow sent this bug on its way to people who are least equipped to deal with it.

The texting each other thing is really funny though.

So good to have more than one bathroom. Glad you guys are on the mend. Totally not fair that kids puke like one time and feel fine and give us the plague that makes you want to die.

I thought we were safe because norovirus destroyed us last year, but NPR tells me this is a brand new one, so we are just waiting....