In what would prove to be a shade of things to come, Ethan made his entrance into this world 7 years ago, over a month before his actual due date.  Apparently unable to wait for a wider and more adoring audience, he vacated the womb in the most complicated way he could come up with (starting labor with your cervix sewn shut? really special.), and began the next phase of taking over our lives without any thought for our sanity or our, we now realize, absurd expectations of getting any sleep whatsoever for the next year...or two (seriously, babies can be so inconsiderate).  I now believe he made his hasty entrance into the world not only because he needed more attention than he was getting while locked away in my one-trick pony uterus, but because Cinco de Mayo is a pretty kick-ass day to celebrate a birthday.   Really, you've got your 4th of July birthdays, which really rock, but unless he was going to be almost a month overdue, he had no shot at that.  Fortunately he stayed put during St Patrick's day, although I did spend that one in the hospital at "hotel high risk," so it would have been a possibility.  So really, in that time span, his best bet for a built-in party theme for the rest of his life was really limited to May 5th. Clearly, his hands were tied.

In years past, we've gone the Sesame Street, Disney, Beatles (?!), Star Wars route, but this year we were plum out of theme ideas (read: I didn't have the energy or desire to go through 6 hours of Pinterest searching for Martha-esque party ideas related to Jedi training or Magical Mystery Tours). So this year, we decided to keep it simple with an obvious Cinco de Mayo/fiesta theme and your basic old school BBQ.  I bought some cheap decorations from Party City and hung them from the trees in the picnic area, a couple packages of sacks for sack races and a traditional(?) burro pinata, filled with sugar and food coloring.  I whipped up cupcakes the colors of the Mexican flag (again with the food coloring) and cut watermelon into stars and flowers with cookie cutters (my one nod at Pinterest for this party).  We got hot dogs, sausages, chicken and corn on the cob for the grill.  I threw together a way too onion-y black bean and corn salad.  Bam! Instant party!

And then we woke up on Sunday morning to fog.  And cold.  And because our party was going to be higher up in the mountains, it was going to be foggier and colder than our regular old fog and cold.  The entire week leading up to Sunday had been scorching.  Hottest week of the year so far.  We'd welcomed summer, as we usually do, right around the end of April, beginning of May.  Afternoons at the pool, cranking up the air conditioner, realizing that "I want a black car with a black leather interior!" was really a mid-January decision--all hallmarks of the coming sweltering months of a California summer.

I sent a note to our friends, letting them know that it was chilly up at the party site and that they might want to bring extra layers for the kiddos. 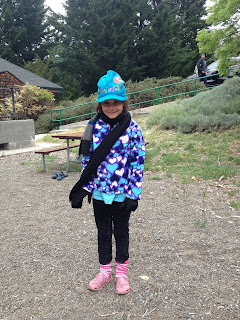 I wasn't kidding.  The mercury barely hit 50 all day up in the mountains and rather than fanning themselves in the heat of the afternoon and holding ice cold beers to their cheeks to cool down, most adults spent their afternoon huddled around the bbq pit or under blankets. 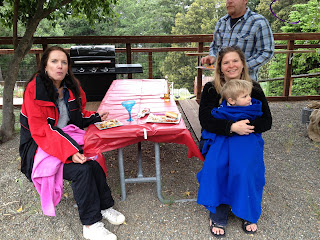 at least the blankets were colorful, though, right?  Festive!

The kids managed to have fun--

See?  They look like they're enjoying themselves?  Right?  Maybe? 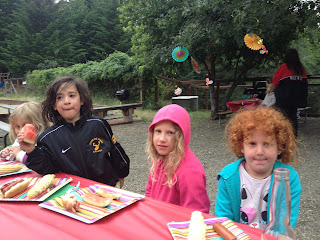 Corn on the cob makes everyone happy... 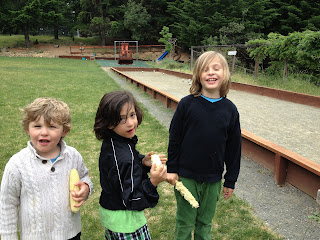 My kid refused to put on long pants, even as his friends bundled into their scarves and sweaters.  But at least he put on someone else's jacket. 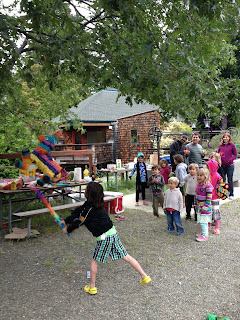 Ethan eyes the cupcakes while adults huddle by the fire. 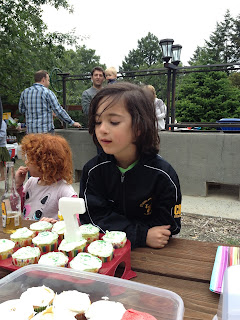 After a quick blowing out of the giant "7" candle, and perhaps making a wish for warmth, we abandoned the cupcakes for roasting marshmallows.  Because, you know, fire and warmth and whatnot. 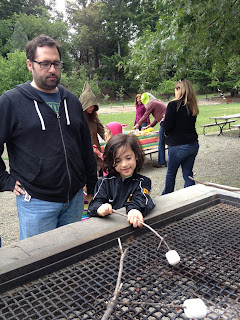 Sadly I have no sack race pictures because I was too busy laughing my ass off at the sack racing children and adults.  There was much flailing and ankle-twisting action.  It was fabulous.

A good time was had by all (most?), but I do hope that I can't see my own breath at next year's party.

Wow, you guys are troopers! Texans don't do no 50 degrees. This has been the weirdest spring!

Great party theme though! I love the simplicity. Good food and fun. Perfection.

Party looks awesome. I cannot believe these little babies are 7-- WHAT???