Where the Wild Things Are....

I was going to write this post last night, but then one of our neighborhood coyotes started yipping up a storm right behind our garage.  So instead of writing, I stood out on our side deck and listened to his barks echo all over the valley.  Until our up the hill neighbor opened his screen door and yelled, "SHUT UP!!!!"  Ahhh, nature lovers.  Although to be fair, its still a novelty to me; I'm guessing some day I'll see the coyote's howling as an annoyance on the same level as the puffy red squirrel who is constantly trying to get into my bird feeder.  At any given moment, I can be seen opening my screen door and lunging towards the feeder, waving a magazine and yelling "SHOO!!! Go away squirrel!! That food is for my birds!!"  Yes, my birds.  I own them.   I'm going to be an awesome old lady, with my birds and my cats.  My poor husband.

Yesterday morning as we were pulling out of our driveway, Ethan said, "Mommy, a deer!!" I slammed on the breaks afraid I was about to steamroll Bambi, even though my rearview camera showed no evidence of a deer, or anything else for that matter, in the green zone.  Except the cliff on the other side of the road from our driveway.  Yeah, there's a sheer-ish cliff right below our steeply inclined driveway.  Want to come over?!

"No, mommy, not behind the car, up there!"  Ethan pointed up into the brush/trees/rhododendron bushes that comprise our front yard.  Nope.  No deer.  "See?  His ears?" my eagle-eyed kid said and when I looked again, there it was.  So close, massive ears all perked up, just his face showing above one of the bushes.  He was just starting to get his antlers; they were nubby little things on his head, and his eyes were just massive.  Husband has also seen a spindly-legged, Bambi-spotted baby fawn recently as well.  And last week I caught a bunny hopping through our back yard.  I haven't seen the bobcat more than twice, which is kind of a bummer, because...well, you know me & cats.

In news of the more civilized and human kind, the kid is almost out of school--this time next week he'll only have one more full day??  I have to say, this year has been a rollercoaster for us, and I'm still not quite done being bitter about how Ethan (and Husband and I) were treated at his old school.  In talking to his new teacher, who's now had him in class for five months, I am certain more than ever that the old school was simply looking for a way to manage classroom behavior that required no effort on the part of the teacher.  His new teacher was shocked that they'd pushed so hard to have him evaluated at all, let alone medicated.  She assured me that in all these months, she's not seen one red flat that would have prompted her to suggest either.  This, after the old school sent him home early four days into school because he was "being silly," and was sitting us down to talk about a plan of action for evaluating and medicating our kid before the end of September.  Is it possible that he simply matured in that time and outgrew the sillies?  Sure.  Its also possible that the different structure of the new school is what he needed to be a successful learner.  Its also possible that he actually does have ADD/ADHD, but has clearly developed coping mechanisms at this new school that he was not given the option or the help to acquire in the old school.  Either way, he's happy now.  And he's learning, which the other school said he'd be utterly unable to do without medication.

This summer we'll be getting our Lego, Theater, Space & Tae Kwon Do camps on, as well as some trips to some places.  I tried to keep some of our time open, so we can do things like this hike we took on Sunday--- 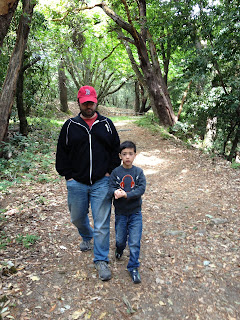 My boys are wicked outdoorsy 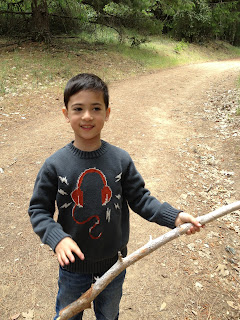 There was a lengthy search for the perfect walking stick.  Husband and I were happy with Ethan's cast-offs. He is a very picky walking stick picker. 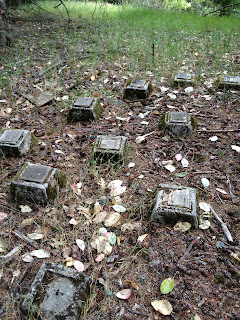 We "discovered" what looked to be some sort of foundation stones off the trail.  Weird. 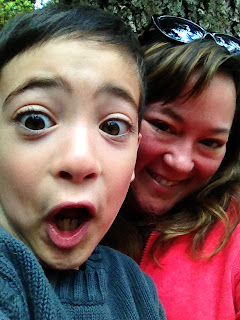 Here I am, thinking we're taking a sweet mother & son photo. Seriously, how do I not yet realize that he's going to make a face 99.9% of the time? 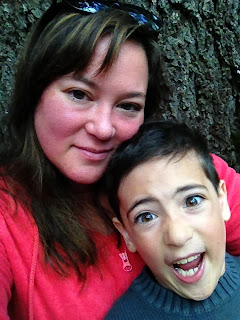 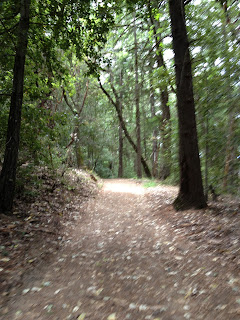 I love me some trees.  Although the peaceful idyllic mood one generally associates with a hike through the wilderness, listening to the birds and the quiet hush of the breeze rustling the leaves was not quite our experience on Sunday.  No, this trail is on the other side of mountain highway from the local shooting range.  So, yeah.  Instead of hundreds of chirping birds, we heard hundreds of guns shooting hundreds of bullets at targets, about a mile away from us.  Constantly.  So, you know, super relaxing. 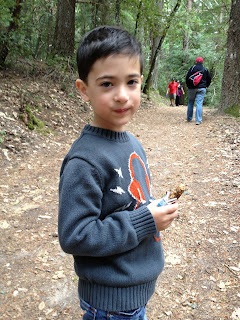 Stopping for a little z-bar, the hipster-pretending-to-be-a-hippie's choice in mid-hike snackage.  Also? When did he turn into a teenager?

Tomorrow is Ethan's class play.  I've been furiously working to whip up signs to identify the characters and a program for the parents.  This involves a whole lot of scouring for clip art (which feels so mid-90's to me), yarn, construction paper and laminating machines.  I'm all kinds of volunteery.  Ethan is going to be a snake in his play, which is apparently called "Life Cycles."  He has to wear a white t-shirt, jeans and a pair of sunglasses.  He has been coming home for weeks boasting about how he's learned "all his lines" (probably a few words?) and that his teacher tells him he's the only one singing with "infection" (inflection, I guess?), so he's very proud of that, my little actor.

So you're caught up on us.  Wild animals, gun hikes, and snake plays.  Its all good.

Ethan looks a lot more like Pedro when he is making silly faces.

The play sounds adorable, and I love love love his silly faces-- so cute!