One Week Down, Nine To Go!

Week one of summer vacation is quickly shrinking away in the rearview mirror and we're full-steam ahead into week two.

Last week was Tae Kwon Do camp, where Ethan broke boards and moved up 1/2 a stripe.  This week, he will be building things with those magical little blocks (and foot arch nemesis) at Lego camp.   Bedtimes have been erratic, and considerably later than usual.  Wake-ups have been downright teenager-esque.  This weekend Husband and I went in to his room to rouse him at 9am so we could go out for Father's Day breakfast.

When he's not sleeping in or breaking boards, we've been spending a lot of time at the pool.  From mid-afternoon until dinner time, you can generally find my kid cannonballing into the deep end or convulsing shivering his way over to the hot tub to fend off the hypothermia (ah, the perils of those with 0% body fat).

I've also instituted a 20-minute quiet reading time into each day, as well as a page or two out of one of those "summer bridge activity" books.  These have met with varying levels of success.  A couple weeks ago, Ethan read an entire Magic Tree House (Jack and Annie, those crazy kids got mixed up with some ninjas and age-appropriate chaos ensued) in one sitting.  I received a mini-book-report at the end of every chapter, along with the disclaimer, "I'm just going to read one more chapter," until there were no more chapters to read.  I might have been kvelling a bit; Ethan's always loved books, but until recently has been hesitant to really get into a book on his own, for the fun of it.  So I hoped that was the beginning of a voracious daily reading habit.  And maybe on some level it is, but for now it seems to have been a one-of sort of thing.  By late last week, Ethan was well into bargaining mode on exactly how many days and for just how long he had to read.  "How about I read for 10 minutes for 4 days and then get the rest of the week off?"  Um.  How about "no."  I reiterated management's 20-minutes each weekday policy and there was much whining.

But no amount of whining about reading compared to the outright rebellion I received when I introduced the workbook, with the rule that we will do ONE page (front and back), each week day.  One page of 1st grade review.  We're talking a five minute commitment, even with a heavy dose of day-dreaming and lollygagging stirred in the mix.  Oh my lord.  You'd have thought I was suggesting he master quantum physics and string theory (I don't know what either of those things are, but I've heard of them on NPR's Science Friday AND The Big Bang Theory) in his spare time between finding the cure for cancer and solving the problem of world hunger.  One page of a work book is apparently high-stakes pressure for a seven year old on summer vacation.  There was much, "I'm not supposed to have to do ANY work on summer vacation!!!!!" hand-wringing, and my favorite, "DON'T YOU CARE ABOUT MY HAPPINESS???!! I WILL NOT BE HAPPY IF I HAVE TO DO SCHOOL WORK! DON'T YOU CAAAAAAARE?"

The best part was when I got him quieted down long enough to look at the first activity, which went something like this, "Look at each of the picture.  Then circle the consonant sound that each word begins with," followed by a picture of a cat with the letters "c" and "t" below it for options.

'THIS IS SO EEEEEEEASY!!!!" he squealed with delight and gladly went about his one page of brain-strain and told me repeatedly how I got purchased the wrong book because this was far too easy and he could be done with the whole book by the end of the week.  Of course, when I suggested if it was so easy, why not go ahead and do 3-4 pages at a sitting, he got all rule-follower-y on me and referred to the "Day One" at the top of the page.  "Mom, we're only supposed to do one page a day.  Those are the rules."  Fair enough.

Look, a bunch of pictures of Ethan at the pool. Note: a combination of squinting in the sun and his general weariness of my incessant need to document every moment of his life have led to the Chandler-esque fake smile of a child humoring his increasingly irritating mother.  He's got it tough. 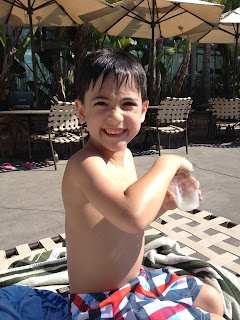 Now that he's too big to hang in the kiddie pool during adult swim, a lime icy is the only thing that makes those infernal 15 minutes every hour tolerable. 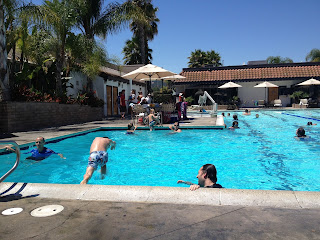 Three years of swim lessons to coax the kid to put his head under water, and now Husband has taught him how to dive in one afternoon at the pool. Sigh.  Although, I must use the word "dive" very loosely, as you can see in this picture his foot is the first thing making contact with the water... 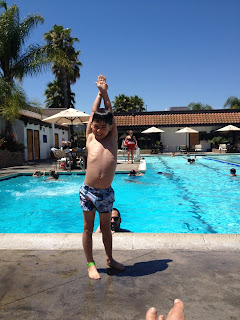 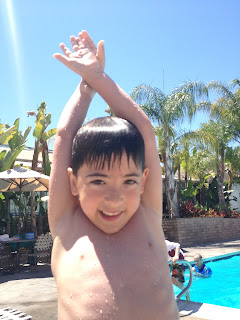 omg, he's so annoyed at me! 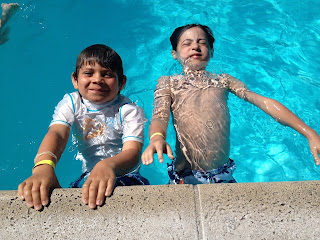 His friend Harry is so willing to pose and smile for me, but Ethan insisted on floating away in every single picture I tried to take of them. 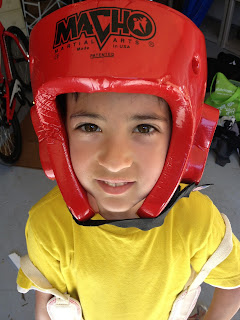 After tae kwon do camp, Ethan & Husband dug out Husband's old tae kwon do gear and we found this gem from his sparring days.  MACHO! 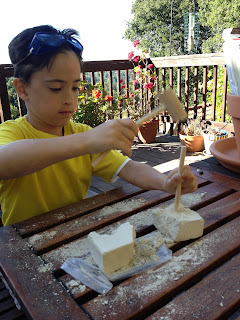 This weekend, after Ethan requested permission to make a random trip to Target to spend one of his birthday gift cards on "something I find, that I want!" I directed him up to the room where toys go to die his playroom, and told him to look in the closet for the pile of Chrismukkah/birthday presents that are still in their original packages and suggested that for the rest of the summer he treat that closet like his own private aisle at Target.  So he pulled out this gem-finding Smithsonian kit and we took turns smashing the hell out of it with the wooden chisel and dusting it off lovingly with the teeny little brush that came with the kit.  To date, we have found 10 little gems of varying degrees of "oooooh & ahhhhh"-ness.  Ethan loves goggles. 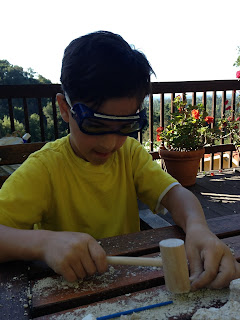 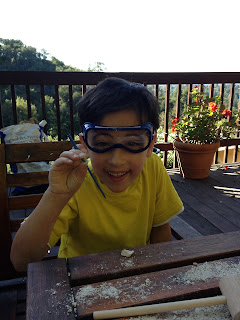 Oh, another pool picture! (out of order).  Please note, this is the only picture you will see of me this summer in a bathing suit.  You're welcome. 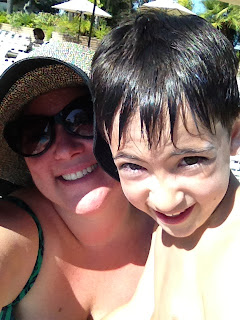 We are living parallel lives! I subbed out the bridge books for iPad apps--so far so good. He especially likes rocket speller and math bingo. And I hate that I have to strongly encourage reading time-- I wish it were spontaneous!