A Picture and Some Thoughts... 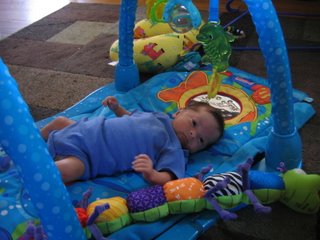 When he's not lounging in his aquarium kick & crawl and poking hesitantly at the giant squeaking, crinkling inchworm, Ethan is enjoying his new found skill as a breastfeeder. Yes, we've almost entirely cut out the middle-man and it's down to just him and me. Thank GOD! Finally feelings of inadequacy are starting to fade away and maybe, just maybe, I'll let myself believe that I'm a relatively competent mother. I mean, when you hold me up to someone like, say, Britney Spears, who is probably supplementing with Bud Light, I am in the running for Mother-of-the-Freaking-Year award simply for being sure Ethan is strapped into his car seat and not hanging out in the glove compartment or something.

File this under: "she thinks too much"--I am realizing that every day that passes with Ethan is a day he will never be this little again. While a couple weeks ago I felt like I was wishing away this "up all night, no idea what he wants when he cries" and really wanting him to skip straight to 6 months, now I am sad each night when I go to sleep that the day is over and he's going to be a day older when we wake up in the morning. He changes so much every day; how will I ever remember it all?

In other news, Ethan is 6 weeks old, over 7lbs and is starting to show interest in things other than the back of his eyelids and my boobs. As seen in the picture above, he is beginning to "interact" with some of his toys. And by interact I mean he lies there, inadvertently kicks things when he flails and spits up when he gets too excited. Good times...

Speaking of good times, I made my first attempt to reclaim my pre-baby "party girl" ways on Saturday. Husband took Ethan up to his mother's for a visit and I tried to find something in my closet that didn't make me look like I was still pregnant (unsuccessful) and went out for drinks with the girls. Having made the plans almost a week in advance, I was on the edge of my seat in anticipation---me, my girlfriends, gorgeous summer weather and a pitcher of margaritas! I could barely contain myself!!

I was home, asleep on the couch and hour and half after leaving the house. I had two drinks. Two relatively weak, very girly frozen margaritas. I was not drunk, or buzzed or even tipsy. I was exhausted. All I could think about was, "It's quiet at my house. It's empty. I could sleep for a couple of hours. Really sleep." That, combined with the sedative effect of the tequila and I was powerless to fight it--I practically nodded off at the bar. And I used to be life of the party....sigh.

The nap was fabulous. Waking up when Husband and Ethan returned and snuggling with my little man was pure bliss.
Posted by sarah at 4:36 AM

That is so awesome that you got to hang out AND sleep. All in the same night!

Those caterpillar toys are apparemtly the greatest thing ever made. Jack has one in his stroller. He can not look away. Can. Not. Hours of entertainment.

You'll remember him being so little because you have the blog! But you're right, the time really does fly by.

It sounds like things are getting easier...I am so glad you are appreciating this time with Ethan! He looks great.

What a party animal, LOL! I am so glad you were able to get out and have some you time.