Today we started our Water Babies class and introduced Ethan to the wild wet world that exists outside of his aquarium bathtub. Actually, it was very much like his bath time, but in a really, really big tub. And instead of being naked, he was in swim diaper that are too big and swim trunks that are too big. This is the joy of having a small baby; nothing fits. And with the fear that the pool people would oust us from the facility due to the gaping space between our son's bathing suit and his body, we raced to CVS to find safety pins. And we safety pinned up his suit. Quality. 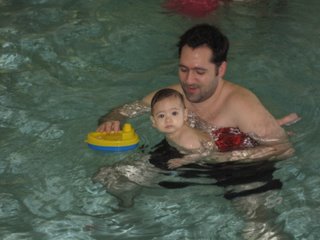 Husband spared me the horror of cramming my ass into a bathing suit and took one for the team. Hence, I had the awesome responsibility of capturing the future Olympic swimmer's first foray into the shallow end. I have no doubt that I was super annoying to the dad in the bleachers with the camcorder; I'm pretty sure I am forever a part of their family movies as I was bouncing back and forth along the edge of the pool taking pictures. He was trying to capture his son in the pool as well, but you know what? You park your ass on the bleachers, you must not want it badly enough; get up and walk around, fool! That's your kid splashing around in there! I feel a little badly about it (mostly because my ass must be gigantic in their film), but oh well. Snooze, lose. 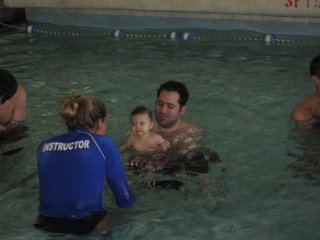 Ethan flirted with INSTRUCTOR (whose name I actually think is Jenny) just like he flirts with everyone from the smelly lady behind us in the grocery line to the nurse in the pediatrician's office right before she betrays him with a big giant needle o' immunization. His flirting really knows no bounds. I'm pretty sure I've caught him making eyes at his Mr. Whoozit when he thinks I'm not looking. He's shame. less. 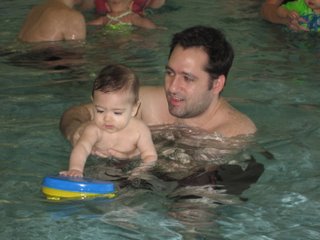 There was much playing with toy boats and singing "The people on the bus" & "Itsy bitsy spider." There was copious splashing & kicking. There was water swallowing. Lots of it. Ethan's insides are adequately chlorinated until this time next week, so that's good news, right? 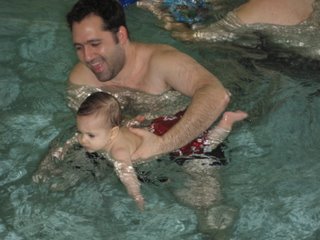 Ethan loved the water (unlike the girl next to him who spent the entire. freaking. time. screaming her head off like she was on fire (also probably went over really well in the bleacher dad's epic film). He never once complained and was often smiling and really enjoying himself. This was until his lips started to turn blue and I could see his...I want to say teeth, but he has none...chattering and his arms shaking. I then went into neurotic psycho mom mode and decided that he was moments away from hypothermia and needed to get out of the pool NOW! Husband thought I was silly. Husband usually thinks I am silly. He is right 95% of the time. This was one of those times. On the way home I recalled my own childhood fixation with the ocean and how I could only be hauled out of the waves on pain of death, regardless of my blue chattering lips and my horrifically pruney fingers. 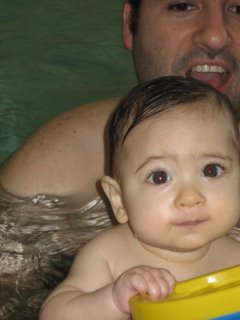 An unexpected perk of the "swim class" was that after all the splashing and kicking and water swallowing and toy boat chasing, Ethan was practically falling asleep as we changed him out of his swim trunks. If only we could bottle this and take it out at 7pm each night. That's it; we're putting in a pool in our basement. 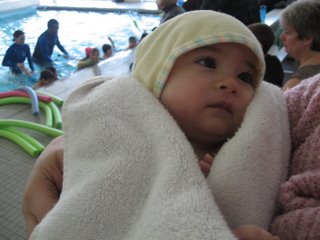 How adorable is that last picture!! Makes me want to just pick him up right out of that pic and snuggle him! First time at the pool is so great. So glad that he (and you) had such a great time.

A baby cried in his class? I thought all babies love the water? I must do more research on this.

Seriously, he had to be the cutest baby there.

Such a cute picture, he is totally snuggable. Looks like you all had a great time!

Totally the cutest one there!!! I have to take Dorothy swimming. You've inspired me:)